After a very impressive season, 360's Leigh Bodden will have some important decisions to make!

In a Patriots season filled with inconsistency, there were only a few players on the roster who avoided volatile ups and downs. Cornerback Leigh Bodden was one of them.

Now, in a decision that highlights a challenging offseason ahead for Patriots management, Bodden's future with the team figures to be high on the to-do list.

ESPNBoston.com's Mike Reiss covers the New England Patriots in his blog. You can send questions and comments to his mailbag.

Bodden is scheduled to become an unrestricted free agent, and if he winds up elsewhere, this is what the Patriots will be missing: (1) a player who tied for the team lead with five interceptions and led the club with 17 passes defended; (2) a 15-game starter at right cornerback who played 82 percent of the team's snaps, the third highest total among defenders; (3) a solid player in run support.

While there were few positives in the Patriots' 33-14 playoff loss to the Ravens, Bodden provided one of them when he was running stride for stride with receiver Derrick Mason before instinctively breaking toward tight end Todd Heap to deflect a second-quarter Joe Flacco pass that was intercepted by Tully Banta-Cain.

The effort reflected what Bodden brought to the Patriots for most of the season and what the team should be seeking in the future: playmaking and reliability.

So will Bodden, set to enter his eighth NFL season, be back with the Patriots?

At this point, he doesn't have the answer. He is open to the possibility because he enjoyed his experience in New England -- going to a winning organization was important to him after he experienced a difficult 0-16 season in Detroit -- but like many players in his situation, he also is seeking long-term financial security.

If that mix is there in New England, he'll be all for it. If he has to go elsewhere for a longer-term deal, he's willing to do that, too.

In that sense, the 28-year-old Bodden is refreshingly honest.

"There are two sides of the spectrum -- football and business," Bodden said a week after the Patriots' season ended. "For me, the taste of playoffs and winning, that's something that will be a priority [in any decision]. But if presented something financially that you can't pass up, that is also a consideration. We aren't going to play this game forever, and you have to look out for your best interests on the financial side."

Bodden said he doesn't have a clear indication as to what the Patriots might be thinking in terms of a long-term commitment. When players met with coach Bill Belichick last Monday for the final time, the message was that players with expiring contracts could expect to hear from the club by early February.

Bodden now will keep in contact with his agent, Eric Kaufman of Premier Sports & Entertainment, to see whether there are any new developments. Bodden switched agents during the season, but he said that had nothing to do with his contract situation and was geared more toward off-field business.

Like he often was on the football field, Bodden (6-foot-1, 193 pounds) finds himself in good position. 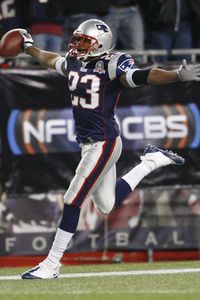 Stew MilneLeigh Bodden was tied for first on the Patriots with five interceptions.

Because of the NFL's uncertain labor situation and the growing likelihood of a season without a salary cap, he projects as one of the top cornerbacks on the open market. That was part of his strategy last year when he signed a one-year, $2.25 million contract with the Patriots, which also included a provision that the franchise tag could not be assigned to him.

"There was a multiyear deal on the table, but it was something that I didn't feel like was market value," said Bodden, who had drawn the most intense interest from New England, Seattle and St. Louis.

"My feeling was that I would play one year for the Patriots, and if I was mediocre, then I would be willing to take that same type of deal the next year. My goal was to go out and show that I wasn't worth that and to try to help myself with the way I played. I took a risk, and I'm just hoping I can get rewarded."

Part of Bodden's mindset is shaped by how he entered the NFL, as an undrafted free agent out of Duquesne. Because of that, as well as playing for nonplayoff teams the first six years of his career, he has generally flown under the radar in the discussion of high-end cornerbacks.

"I always feel like I'm one of the top corners in the league, but I'm not a big name," he said. "People might ask, 'Who is Leigh Bodden?' I feel like it's always been that way, but I feel good about the fact that if you turn on the film, even when I was playing in Detroit, I think you'll see a consistent player who breaks up passes and gets his hands on the ball."

That was the case for much of the 2009 season in New England.

As for what that means for the future, even Bodden isn't sure at this point.

Mike Reiss covers the Patriots for ESPN Boston. You can follow him on Twitter or leave a question for his weekly mailbag.